Several years ago, I sat next to a total stranger at a wedding reception. Janell York was friendly and I immediately liked her positive energy. She was a teacher too, so we had much to gab about! Fast forward four years during a Facebook chat when she mentioned that her students were enjoying the books I had written. One thing led to another and before long we found ourselves on the edge of a cliff, deciding to take a giant leap. She accepted my offer of having her students illustrate my next book. Not THAT big of a deal, you say? The students were in East Mesa, Arizona and I was in Buffalo, New York!

Within a month’s time, Janell had created an after-school Young Illustrators’ Club, a video chat link, and an abundant supply of enthusiasm. Her students hesitantly climbed aboard our waiting ship, and we set sail for uncharted territories on an unknown sea.

Video chats were my only communication with these 6th and 7th grade students, and emails… lots of emails… with Janell. We worked our way through January, February and March. While blizzard winds blew outside my window, and snow made it impossible to see across the street, my fellow sailors talked of hikes in the desert and rattlesnakes. These eight students listened as I explained about weaving the illustrations with the text. They brought their sketches, their questions and their concerns to each meeting, trusting that by the end of March I would wrap my arms around all of their creations and take the tiller for the rest of the voyage. April found me collecting the bits and pieces, tweaking the text, and meeting with my son, who then worked his magic with the layout. And just like that, on May 1st, Song of the Earth was born!

I witnessed young people working remotely on something really hard, taking on a challenge, accepting suggestions, making changes, respectfully standing up for details they believed needed to stay, overcoming nerves, having faith that working together towards a common goal can be energizing, perfecting artistic talents and even discovering hidden ones. These are life-lessons that bubbled to the top as we worked, and reflections of young students that give me such hope.

In May my husband and I flew to Arizona to meet the illustrators and their amazing teacher. In a school in the middle of the desert, we finally met face to face. With pizzas and parents, flowers and families, gifts and gratitude we celebrated. We signed each other’s books. We took pictures. We laughed, and talked, and even shed a few tears… happy, thankful tears.

I shared with them one of my life’s most important lessons, in hopes that they would someday reflect on our time together. My writing began because I wanted to prove to someone else that I could do it. In the end though, I proved to myself what I was capable of accomplishing. I don’t think that lesson was lost on these young students. 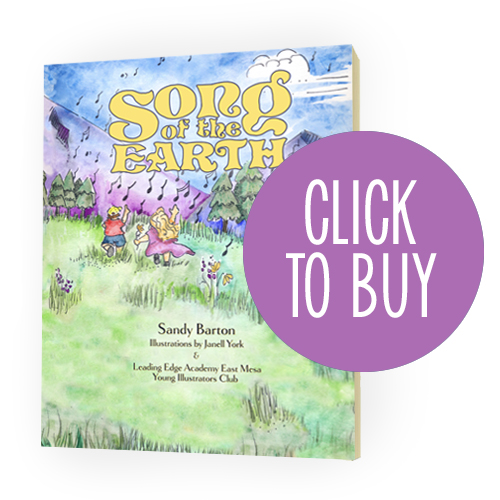